Ready. Set. SHOP! It was the return of Black Friday and you couldn’t escape the sales messages on Social Media even if you tried! Originally an American tradition the seasonal sales have become a truly international campaign, we look at 3 brands who owned Social Media on Black Friday & Cyber Monday and dissect what you can learn from it for your Small Business.

Love fashion? Love 50% off? Missguided had you covered this Black Friday, owning their social media game with numerous discount codes left, right and center throughout the entire weekend.

With the use of GIFs on Twitter and Instagram, Missguided added a sprinkle of sass to their timeline feed allowing their discount deals to stand out from the crowd.

Not only did they update their followers by posting across Instagram, Twitter, Facebook & Snapchat but they also went the extra mile and launched a range of giveaways and competitions to ensure they would stay at the top of their customers mind throughout the sale weekend for a WIN WIN situation!

So what can small businesses learn from the female fashion powerhouse? 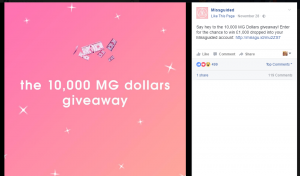 Deals on deals on deals! Amazon took the crown this Black Friday with their social media timeline filled with exclusive deals!

Amazon’s campaign really stood out from the crowd this year as it coincided with their latest product ‘Alexa’ which they incorporated throughout their Black Friday posts. They took an integrated approach with press announcements and set their website to prompt users to to use Alexa to find deals and unlock discount codes.

With the help of video content including a live Periscope session and a promotional video, Amazon’s visuals really helped to boost their online visibility. They even took advantage of their hashtag #PrimePet to incorporate it with Black Friday & Cyber Monday, let’s be honest who doesn’t love a free Amazon cat bed?

What can you take away from Amazon’s seasonal social media strategy?

Ask “Alexa, what are your deals?” to order all your holiday gifts without even lifting a finger. #BlackFriday https://t.co/TRPkFpRANX pic.twitter.com/sowfvKB1nD

Microsoft’s community management team were busy bees responding to each individual query tweeted to them in regards to their Black Friday deals, during a busy period like this something as simple as prompt customer services helped them to stand out from the crowd.

What can you and your business learn from the tech empire?

As an entrepreneur or small business you don’t have to spend a ton of money like the big boys do, you can be just as effective on a limited budget but that’s a blog post for another day.

Did you see or do any cool Social Media activity across Black Friday and Cyber Monday? Caring is sharing so let us know in the comments below.